Hollywood businesses scored 3 of the 11 SUNsational Service Awards presented this year by the Fort Lauderdale Convention and Visitors Bureau. That’s the most of any area in the county and shows that Hollywood is a leader in service! More than 130 people were nominated for providing exceptional guest experiences across all sectors of the tourism industry. Take a look at these three amazing staff members from T.Y. Park, Margaritaville Hollywood Beach Resort and Water Taxi who love their jobs and enjoy serving the guests who come to our community. Congratulations to them and the businesses they represent for a job well done!

Click on the Winners below to watch their videos.

On January 5, 2019, Sebastian was visiting shelters at T.Y. Park to empty trash when he noticed something was wrong with a patron. He asked her if she was choking. She was unable to verbally respond, and her friends and family said she was choking. Sebastian immediately stood her up and began performing the Heimlich Maneuver. She vomited and spit the food she was choking on out. She was okay following the incident. Sebastian’s quick action helped saved the lady, as the family and friends did not know what to do.

With her magical smile and aura of positivity, Joadis of Landshark Bar & Grill at Margaritaville Hollywood Beach Resort embodies SUNsational Service. She has been recognized for her expert execution of the 10-5 rule (eye contact and a verbal greeting). She impressed a potential client doing a site visit so much, that the client wrote an email to the resort’s general manager, calling out her amazing experience with Joadis. Here’s a snippet of that letter: “Our server Jo was the most friendly, grounded, smart, effervescent, outgoing and outright good at what she does server I ever had. Her desire to be helpful and to make sure there were no complaints come out loud and clear.”

In November 2018, the Water Taxi’s Margaritaville Express boat was about a mile north of the Hollywood stop in the Intracoastal Waterway. The mate, David Farr, heard shouts from the starboard side of the boat. He called to the captain, who immediately throttled back and slowed the boat. A disoriented man had fallen off his kayak and was struggling with the tide. David asked if he needed the lifebuoy, which he declined. The mate then placed the buoy close by in case it was needed later. With the boat still idling and drifting alongside, David deployed the rescue platform and clambered down to the water level. David reached the gentleman’s hand and got him onto the boat. He also helped retrieve the kayak. 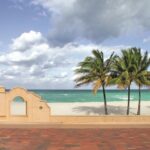 The City of Hollywood has joined with Broward County and other coastal communities to tem...
Temporary Beach Closure July 3rd – 5th, 2020 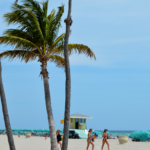