The last cold beers and rum runners were served over a year ago. When will the next ones flow at Nick’s Bar and Grill on Hollywood Beach?

Renovations began last August on the 40-year-old institution on the Hollywood Broadwalk.

“I try not to get aggravated, but the wait is killing me,” Ferro says.

What was supposed to be a three-month freshening turned into a gutting and rebuilding, one that keeps bringing unexpected delays and hurdles.

The latest setback: the new roof has a leak. It has to be resealed and patched around some rooftop flanges. Then there are the contractors who say they’re going to show up and don’t.

He sat along the Broadwalk wall Monday, unlit cigar in his hand, talking about how he had to cancel his usual August vacation to the races in Saratoga Springs, N.Y., because of the ongoing work.

Every targeted reopening date has turned to dust: last November, then spring, then June. On Monday, another round of electrical inspections were supposed to be done. Then the rooftop patching. The inside walls still need to be finished, followed by installation of kitchen and bar equipment and furnishings.

The building, at the corner of Minnesota Street and the Broadwalk, dates to the 1940s, when it started as a hot dog stand. It was converted to a bar and restaurant in the late 1970s by a Canadian owner named Nick. Bob Ferro and his brother Carl kept the original name when they bought the restaurant in 1980 after moving from Boston.

Popular with tourists and locals for its cold beers and icy rum runners dispatched through open windows, Nick’s is known for laid-back, Old Florida charm that fits perfectly with beach breezes and summer torpor. Nick’s has been used for scenes in numerous movies including 1981’s “Body Heat” and 2008’s “Marley and Me.”

The restaurant was known for New England-style seafood such as lobsters, chowder and steamed clams. Nick’s will feature a similar menu and vibe when it reopens, Ferro says, along with its late-night bar scene. 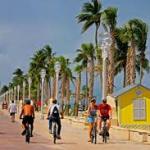